We just got back from Floydfest, where we let our inner hippies out to dance to Michael Franti and eat vegetarian burritos and walk around with no shoes on. It was grand, my friends. Downright amazing. Lady Baby stayed at home, and we camped for two nights with good friends. We ate cookies and charged our smart phones with the car battery and washed our hair in the sink because there was no shower. Really roughing it. No offense to the nice coworker of my husband's who let us borrow his dog tent two man tent, but that mess was tiny. I felt like I was sleeping in a cloth coffin built for 1 person and 1 midget. I am pretty sure it was actually the demo that they set out at the store that you point to and say, "I would like that one." It was so small, I had what can only be called a pre-panic attack panic attack. There was some definite shortness of breathe and sweating. But that could also be attributed to the fact that we were sharing the oxygen and space meant for one labradoodle. But I digress...the festival was lovely and we really enjoyed our time amongst the unwashed masses. I felt it was only fair that you too should enjoy this time. That is why I had a team of five on the prowl for people who are worth an open mouth stare. And find them we did. So sit back, kick your feet up, and commence to gawking. 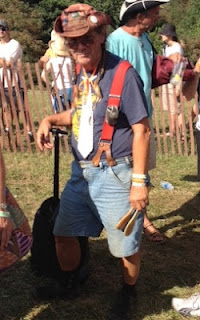 1. This handsome fellow is making a statement. It says, "I love Willie Nelson and jean shorts and suspenders and plastic ties that I can play washboard style." He was a bit of a side show, playing the spoons upon his cheek, inner thigh, and elbow. Then he would ziga-zaga up and down his crimped plastic tie. One man band, that one. He is not as cheery here, waiting in line for the bus as he was earlier in the day, posing for pictures with college girls. Understandable. And his inner thighs probably hurt from being smacked by spoons all weekend.


2. Hmmm. What should I pack to wear to Floyd fest? Bra? Check. Dress? Nah, too hot. Shirt made of cotton? No. Too normal. Hey, wait a hot second. Here is my stretchy lace nude camisole that is two sizes too small. Perfect! This woman was all. over. the. place. Everywhere I looked, there she was. Mixing it up, flirting with middle aged hippies, rocking those motorcycle boots. In 100 degree weather. Guess the lack of shirt balances them out. And the skirt wasn't short enough either. So she rolled it up a few times. Just in case anyone wanted a glimpse of her crotch and thong. Which if I could have taken the pic closer, you would have seen the top of through her shirt. Nothing says available and looking for fun like see through clothes. And sister was looking for some fun. 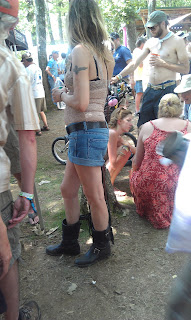 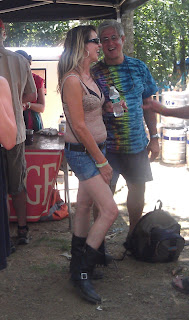 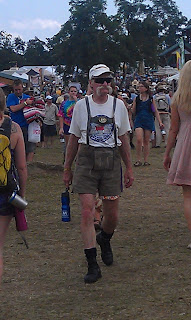 3. Why hello there Herr Fesitvarian. Where did you wander in from? The alps? Y'all know that das lederhosen are made of suede. Cause that's cool and breatheable. Again let me reiterate. It was upwards of 100 degrees in the heat of the day. These lederhosen would not be my first choice for comfortable festival wear. However, the boxers underneath that were playing peekabo with every step really set this look apart and made it all worth it. Cause they had flames all over them. I bet he had to refill that water bottle every 7 minutes for fear of sweating to death. One must hydrate when preparing for the pretend yodeling competition. This outfit makes me yearn to see what gems are hanging in his closet. I can not begin to imagine the fashion wonders in there. 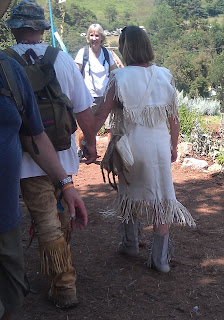 4. Floydfest is a very ethnically versatile place. Here we have what is obviously a Native American. Holt up. Is that a highlighted bob? Hmmm. Fringed dress, fringed bag with detachable animal pelt, fringe boots. All in summery white suede. Well, it is after Easter, so well done there. Sadly, you loose points for the fact that it is hideous and an embarrassment to any person with a drop of Indian blood. Which I have, so I am allowed to judge. The 1/16 bit of Indian Princess inside me is screaming and crying. And again with the suede people. Did no one get the memo that it was the dead of July when they were packing? At least she opted for her sleeveless white leather sioux maxi. Well played. You wonder what kind of husband lets his wife out of the house like that. Then you notice that he is wearing fringed boots. Obviously fringe is their fashion platform as a family.

5. I love a beard. Actually that is a complete lie. I find them to be nothing but a place for insects to burrow and food to get stuck. Lordy, I just heaved a little. Anywho, I do insist if you are going to rock a beard, it should be something interesting. Jaunty if you will. Please direct your attention to exhibits A and B below. On the left, we have Mr Tumnus from Narnia. I am quite certain he has a little flute of same type in his pocket next to his smokes. And of course hoof feet. I bet it was a long walk from the land of Narnia. The fellow on the right in the ill fitting sunglasses went for a real conversation started. The best way to get this party started is to bead up your beard. I know it worked because I stood in line in front of this gentleman, whose name is Bob, and listened to a very intoxicated woman badger him with beard-beading questions. Surely not the conversation he was envisioning when he was picking those out at Michaels. 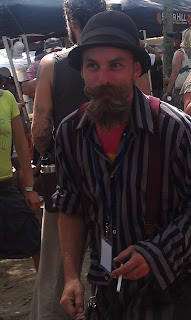 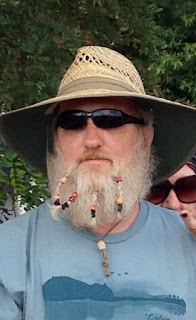 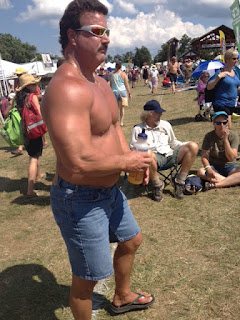 6. And last but not least, we have this guy. I think he came to Floydfest via time machine from 1986. There were lots of dudes with no shirt. There were lots of dudes in flip flops. There were lots of dudes with necklaces. There were even a few in jean shorts *sob*. There was only one guy who pulled all that together into one amazing cohesive look. This guy. My friend Jenn kept calling him the American Gladiator. Most of the time in the south seeing Hippies with dreads and scarf shirts and dirty feet are out of the norm. Seeing over 40 gym rats with curly mullets, tans, and bad sports glasses is pretty normal. I am sure he felt like he was in total bizzaro world. Not to mention he was probably blown away by all the smartphones and lack of shoulder pads. And the recycling. I bet he stole some hippie composting to fuel his time machine.


There you have it. A few of the many people that I spent my weekend staring at. So many weirdos, so little battery power on the Droid. Please remember, suede is for the cool months, shirts should at least cover part of the body, and beards are only acceptable if they step outside of the box. If you learn nothing else from me today, please know that it is always acceptable to have your clothing double as percussion instruments.


Feel free after you have seen this feat for the eyes, check out the stare-itis from last year at Music on the Mountaintop. Classic.